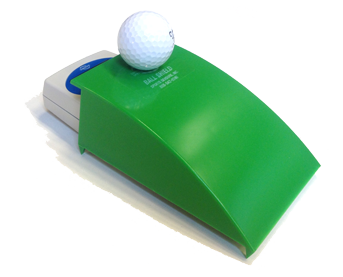 Place the Radar flat on its' back, about 3 feet directly in front of the tee, such that it doesn't read clubhead speed. Place the Ball Shield over the Radar with the sloping surface toward the teed ball, and with the Radar Display protruding from the open end of the Ball Shield.

Ball speed will be measured accurately for balls passing directly over the Radar at launch angles of about 4-6 degrees. Ball speed measurements at higher launch angles will be incorrect as they are reduced due to the cosine effect of the ball trajectory and Radar vector.

Velocities of well-struck balls are typically 40% to 47% faster than clubhead speed. Balls not hit on the clubface center can be much lower in velocity, depending on how far from the center the ball was hit, and the C.O.R. characteristics of the clubface design.

A great tool for long drive competitors, and all serious golfers working on increasing their driving distance.